Who Was Joseph Pilates? 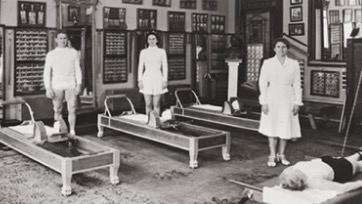 "Necessity is the “father” of invention and knows no law except to overcome!"
Joseph H. Pilates...The Early Days

Joseph Hubertus Pilates (1880 – 1967) was born in Mönchengladbach, a small town near Dusseldorf, Germany. His name had been spelled “Pilatu” and was of Greek derivation but was changed to Pilates (pronounced Puh-lah-tes). He was a small and sickly child who suffered from asthma, rickets and rheumatic fever. He watched wistfully as other children played outside, running and laughing and yearned for a healthy, strong, physically attractive body like his father's.

His father was a prize-winning gymnast and his mother a Naturopath. There had to be a way to overcome his weaknesses, thought Pilates. The more he thought, the more determined he grew. Necessity is the “father” of invention and knows no law except to overcome. After surviving diseases fatal to thousands each year he began his life long quest to find a way to overcome his frailness and get strong and healthy so he could be like his dad.

A family physician gave him a discarded anatomy book and as he put it “I learned every page, every part of the body; “I would move each part as I memorized it”. “As a child, I would lie in the woods for hours, hiding and watching the animals move, how the mother taught the young.” he said. He studied both Eastern and Western forms of exercise including yoga.

Not yet a teen, Pilates began researching many types of exercise to aid in his strength-training program. He sent for books and haunted the university libraries in Düsseldorf. By the time he was 14 he had worked so hard he had developed his body to the point that he was modeling for anatomy charts.

At home, Pilates tried each exercise he read about. He kept records of the effect of each movement to chart his progress. He studied yoga, Zen meditation and several ancient Greek and Roman Olympic exercise regimens. He studied anatomy, hoping to find a way to combine these disciplines to improve his health. He took copious notes.

He believed fervently in the Roman motto “Mens sana in corpore sano,” or, “A sound mind in a sound body.” a philosophy that is the keystone of the Pilates Method.

His used this knowledge to overcome his body’s physical limitations and in his late teens evolved into an accomplished skin diver, gymnast, skier and all around great athlete. Reveling in his strength and overcoming his frailness, he sought a career that was in-line with his passion.

“We should recognize the mental functions of the mind and the physical limitations of the body so that complete coordination between them may be achieved.” ~Joseph Pilates

That determination to overcome spurred Pilates (1880-1967) to devise a movement therapy that has helped millions of people achieve better heath and happiness. Known as the Pilates Method, the series of more than 500 revolutionary and evolutionary exercises is the fusion of ancient Greek, Roman and Eastern disciplines with the Wests scientific understanding of anatomy and physiology.

This hybrid approach to fitness pioneered by sickly child merged the best teachings of both worlds into a method that is at the for fount of a Mind Body Movement that, today, is turning the fitness world in-side-out and revolutionizing the way fitness is taught.